Syrian FM:
Israeli aggression on Syria part of attempts to prolong crisis
TEHRAN (defapress) – The Foreign and Expatriates Ministry said on Monday that the Israeli aggression carried out at dawn on Damascus and its Countryside is an attempt to prolong the crisis in Syria and the terrorist war on it.
News ID: 75128 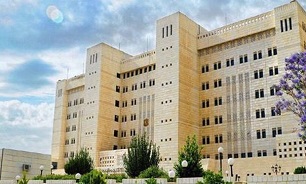 In two identical letters sent to the UN Secretary General and Head of the Security Council, the Ministry said this aggression attempts to raise the morale of the remaining terrorist hotbeds that are subservient to the Israeli occupation, in addition to being an attempt by the occupation authorities to avoid their escalating internal problems.

“Syria affirms that Israel’s persistence in its dangerous aggressive behavior wouldn’t be possible without the unlimited support of the US administration and the immunity provided to it by the US and other Security Council member states,” the letter stated.

The Ministry reiterated calls for the Security Council to shoulder its responsibilities as per the UN Charter and take immediate and decisive steps to prevent Israeli attacks from reoccurring, to force Israel to respect resolutions on disengagement, and to hold it accountable for its crimes against the Syrian and Palestinian peoples.