Over 3500 Corpses of Victims Killed by ISIL Discovered in Raqqa's Mass Grave
TEHRAN (defapress)- The Syrian Army discovered hundreds of dead bodies of the people who had been massacred by the ISIL terrorist group in a large mass grave in the Southern part of the city of Raqqa, media reports said Saturday.
News ID: 75797 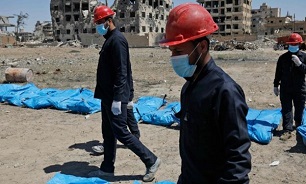 The large mass grave has been found in al-Fakhikheh region in Southern Raqqa and it contain over 3,500 corpses, the Arabic-language Arabic-21 news website reported.

It noted that the mass grave contains the bodies of the oldest and biggest of ISIL's victims discovered so far as many graves are incorporated in it.

A sum of eight mass graves have been discovered in the surrounding areas of Raqqa City so far and over 900 corpses were found in one of them discovered in Panorama.

In a relevant development last week, the Syrian Army discovered over 10 dead bodies from the debris of buildings destroyed in the US-led air raids on Raqqa city and mass graves of the ISIL's victims.

"The dead bodies of at least 11 Syrian victims massacred by the ISIL were retrieved from Fakhikheh mass grave South of Tale al-Ba'as Garrison in Raqqa City," media activists said.

Meantime, media activists said that the bodies of two civilians who had been killed in the US airstrikes were also discovered from two buildings in al-Badou district of Raqqa City.

In a relevant development earlier this month, the corpses of over 30 people who have been killed by the ISIL terrorists or in airstrikes by the US-led coalition were found from mass-graves and rubble of buildings in Raqqa.

Media activists in Raqqa reported that the civil workers have discovered the bodies of 28 people, including women and children, from a mass-grave near the village of Fakhikheh.

They added that corpses of 4 other civilians, including one child, killed in the US airstrikes, have been found from under the debris of a building in al-Haramiyeh and al-Badou districts in Raqqa.

After one year of occupation of Raqqa by the US and the Syrian Democratic Forces (SDF), the corpses of ISIL and US victims are everyday pulled out of the mass-graves and ruins.