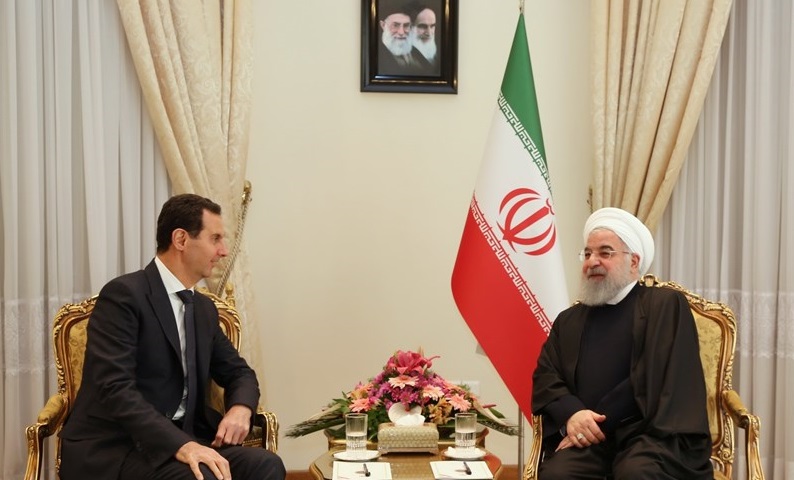 In a meeting with his Syrian counterpart Bashar al-Assad in Tehran on Monday, Rouhani referred to Iran's seriousness for cooperating with and helping the Syrian government in the process of reconstruction of Syria and consolidating security and peace in the Arab country, adding, "The Islamic Republic of Iran will continue to stand by the Syrian government and people like before."

"In fighting terrorism in Syria, the Islamic Republic of Iran has always stood by the people and government of the country, sparing no effort in this regard," the president’s official website quoted Rouhani as saying in the meeting.

He further stressed that Iran is ready to have a role in Syria's reconstruction, saying, "Tehran supports Damascus in the process of stability and return of refugees."

"Iran and Syria have many religious and cultural bonds, and relations between the two countries are based on brotherhood and unity."

Expressing satisfaction about multilateral cooperation and the status quo of security in the region, Rouhani said, "In the latest Sochi Summit, the presidents of Iran, Russia and Turkey stressed maintaining the territorial integrity of Syria."

He described the Iranian vice president's recent visit to Syria as effective and successful, adding, "The path of Tehran-Damascus cooperation is clear and the Islamic Republic of Iran will be alongside the Syrian government and people."

"The guidelines of the Leader of the Islamic Revolution are a strong support for development of cooperation and relations between the Iranian and Syrian governments," he went on to say.

For his part, the Syrian president said, "Syrian people and government always appreciate the Iranian Leader, government and nation's support in fighting terrorism in Syria and the region."

"Today, Syria enjoys more security and stability compared to the past,” Assad added.

"We acknowledge Iran's approach in multilateral cooperation, including the Astana Process and the recent Sochi Summit," the Syrian president concluded.

Assad also met with Leader of the Islamic Revolution Ayatollah Seyed Ali Khamenei in Tehran earlier in the day.

In recent months, the Syrian army has managed to liberate many of the areas occupied by terrorists and has begun the reconstruction process.

In December 2018, Syrian Ambassador to Tehran Adnan Mahmoud said his country gives priority to Iran for carrying out projects in the reconstruction process of Syria after years of war.

In September 2017, Iranian Foreign Minister Mohammad Javad Zarif said on the sidelines of the UN General Assembly in New York that Iran would assist the Syrian nation in reconstructing their country after the war, in the same way that it contributed to the delivery of humanitarian aid to the Arab state amid the crisis.