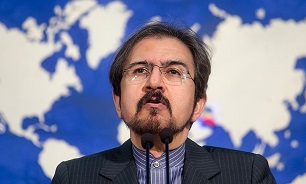 In a Wednesday statement, Foreign Ministry Spokesman Bahram Qassemi called on the two leading and influential states of the sensitive region of South Asia to take into account the complicated situation in the region, which seems vulnerable over growing instability, insecurity and foreign interferences.

Iran calls on India and Pakistan to show self-restraint and make optimal use of all diplomatic mechanisms in order to resolve their disputes peacefully and take required measures to put an end to the tension created, the Foreign Ministry’s website quoted him as saying.

India and Pakistan are on the brink of a major confrontation after the latter claimed to have shot down two Indian fighter jets in response to the bombing of alleged "terror" targets inside Pakistan.

But the risk of an all-out conflict rose dramatically on Tuesday when India launched air raids on what it said was a JeM training base.

On Wednesday morning, New Delhi and Islamabad were engaged in a battle of conflicting military claims.

At least four Pakistani civilians were killed late on Tuesday in the cross-border fire between the two nuclear-armed South Asian rivals.

The operation of a cross-border train service between India's capital New Delhi and Pakistan's eastern city of Lahore has been temporarily suspended due to the "prevailing tensions" between the two countries.