Pakistan Hands Over Captured Pilot to India
TEHRAN (defapress)- Wing Commander Abhinandan Varthaman of the Indian Air Force has been reportedly handed over to New Delhi, two days after he was captured by Pakistan following the downing of his aircraft over the Kashmir region.
News ID: 75914 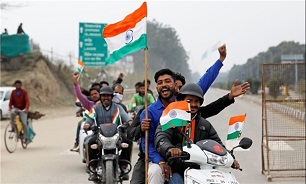 Hundreds of Indian have gathered at the Attari-Wagah border to meet the pilot, who is welcomed like a hero, after the pilot was transported to the border crossing in a military convoy which set out from the Eastern Pakistani city of Lahore, Asia News reported.

Shortly after the downing, viral videos emerged on social media showing the pilot surrounded and beaten by an angry mob, with Pakistani soldiers trying to rescue him. In addition to that, Islamabad released – and then deleted – footage showing the pilot blindfolded and with blood on his face.

Islamabad is ready to hand over a pilot captured after an Indian aircraft was downed over Kashmir if the move will help defuse tensions which have pushed the neighbors close to war, Pakistan’s Foreign Minister Shah Mehmood Qureshi stated.

On Wednesday, in the latest escalation of tensions with Pakistan, Islamabad’s military claimed it downed two Indian warplanes over its air space and arrested the pilot, who survived the crash.

Two people were also killed after an Indian Mi-17 helicopter crashed on a field in the Indian-controlled part of Kashmir on Wednesday, police reported. The helicopter apparently went down near Budgam in the Indian State of Jammu and Kashmir.

It comes just a day after India carried out an aerial operation, targeting a Jaish-e-Mohammad terrorist group camp, which claimed responsibility for the deadly terrorist attack against the Indian security convoy in mid-February. The camp was situated in the Pakistani-controlled part of the Kashmir region, while Islamabad accused New Delhi of violating its airspace. Pakistan has condemned the move, saying it reserved the right to respond to the incursion at a time and place of its choosing.