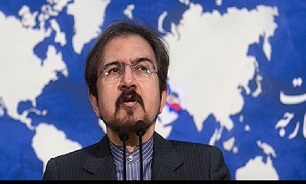 In a statement on Wednesday, Foreign Ministry Spokesman Bahram Qassemi condemned the “inhumane move” and expressed sympathy with the Afghan government and nation, particularly the families of victims of the attack.

“Carrying out terrorist attacks against innocent people is the most inhumane method used by terrorist groups to achieve their illegitimate political goals and privileges,” the Foreign Ministry’s website quoted him as saying.

“We are sure that the nation of Afghanistan will stand behind their government and continue its move, in a more determined way than ever, to strengthen stability and security in the country,” the spokesman added.

Qassemi also underlined that Afghans have the backing of the Iranian government and nation in their efforts.

A suicide bomber, who was on foot, detonated his explosives near the office of a construction company near Jalalabad’s airport on Wednesday, killing 16 employees of the Afghan company.

The Daesh (ISIL or ISIS) terrorist group has claimed responsibility for the attack.

Afghanistan has been gripped by nearly constant conflict since the Soviet invasion of 1979, which was followed by civil war, the Taliban rule, and the US invasion in late 2001.