Iran Raps Arab League’s ‘Invalid’ Statement
TEHRAN (defapress) - Iran’s Foreign Ministry dismissed as invalid and unconstructive accusations that a four-party committee of the Arab League has raised against Tehran, saying such futile stances would only widen the gap in relations among regional states.
News ID: 76045 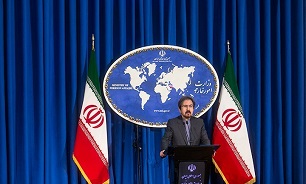 In a statement on Thursday, Foreign Ministry Spokesman Bahram Qassemi rejected the groundless allegations levelled against Tehran in the Arab Quartet’s statement.

The Arab Ministerial Quartet Committee, which met in Cairo on the sidelines of an Arab League meeting on Wednesday, accused Iran of meddling in the internal affairs of other countries and expressed deep concern over what it called “Iranian sectarian incitement in Arab countries” and “supporting terrorist militias”.

Qassem said such invalid and unconstructive statements result in nothing but deeper distrust and widening gap among regional countries.

“Members of that (quartet) committee are well aware that the statement does not represent the views of all countries in the region and only reflects the special attitude of certain states,” the Iranian spokesperson added.

He also underlined that Iran would not be influenced by such “hostile measures based on chronical delusion” and will never change its independent policy of opposing the invasion of Yemen or fighting against terrorism and trans-regional forces in the Persian Gulf.

“Iran believes that regional states must move towards creation of sustainable security on the basis of collective cooperation with all countries in the region,” Qassemi said, calling on the Arab League members to abandon the policy of “hostility, sanction, blockade, attempts to delete a nation from the regional equations, and military invasion”.

He further recommended the Arab Quartet Committee members to push for trust-building and forming inclusive regional structures for collective cooperation instead of paying the costs of unconstructive measures.

“By adopting such policies, those (four) countries cannot shirk responsibility for their destructive policies that have created and prolonged crises like the one in Yemen and the humanitarian catastrophe in that country,” he concluded.