Pompeo Rebukes Senators for Calls to End US Support for Saudi War on Yemen
TEHRAN (defapress) – US Secretary of State Mike Pompeo rebuked the senators who oppose Washington's involvement in Saudi-led war on Yemen that has so far claimed the lives of thousands of civilians.
News ID: 76215 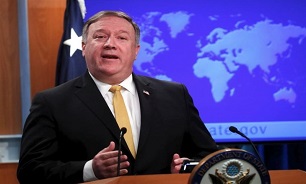 “We all want to improve the dire humanitarian situation. But the Trump administration fundamentally disagrees that curbing our assistance to the Saudi-led coalition is the way to achieve these goals,” Pompeo told reporters at the State Department on Friday, according to Washington Examiner.

He took a defiant posture two days after a bipartisan majority of the Senate called for President Donald Trump to end US involvement in airstrikes launched by Riyadh.

"The senators who voted 'aye' say they want to end the bombing in Yemen and support human rights. But we really need to think about whose human rights,” Pompeo said.

The resolution passed 54-46 on Wednesday, and six Republicans voted with Senate Democrats to disapprove of the policy.

The Republican defectors hailed from various wings of the party. Utah Sen. Mike Lee, one of the original Tea Party lawmakers, co-sponsored the resolution. Maine Sen. Susan Collins, one of the most prominent moderate Republicans, voted with Lee and the Democrats. The resolution was also backed by Sen. Jerry Moran, who represents Pompeo’s home state of Kansas.