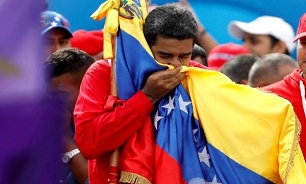 "President Nicolas Maduro has asked the cabinet to resign to carry out a deep reorganization of the Bolivarian government," the tweet reads.

Rodriguez added that the reorganization would be aimed at "protecting the homeland of Bolivar and Chaves from any threat," Tass reported.

On January 23, Juan Guaido, Venezuelan opposition leader and parliament speaker, whose appointment to that position had been canceled by the country’s Supreme Court, declared himself interim president at a rally in the country’s capital of Caracas

Several countries, including the United States, Lima Group members (excluding Mexico), Australia, Albania, Georgia and Israel, as well as the Organization of American States, recognized him. Maduro, in turn, blasted the move as a coup staged by Washington and said he was severing diplomatic ties with the US. On February 4, most of the European Union member states recognized Guaido as Venezuela’s interim president