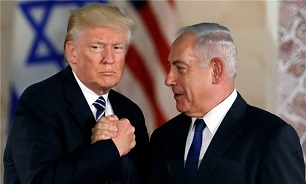 Trump said via Twitter on Thursday that the time has come for the United States to fully recognize Israel's sovereignty over the Golan Heights, Sputnik reported.

“We call the Secretary-General of the United Nations, the Security Council and the General Assembly to condemn President Trump’s statement and to take all the necessary steps to ensure the implementation of the relevant resolutions in order to maintain peace, security and stability in the world,” Jaafari told reporters.

Jaafari added that he expects France’s Ambassador to the United Nations Francois Delattre, who is now presiding over the UN Security Council, to take “firm steps” in condemning Trump’s statement.

Jaafari referred to Trump’s tweet as a “flagrant violation” of existing UN resolutions and international law, adding that the government of the United States has no right to decide on the fate of the Golan Heights.

“Our Minister of Defense, a couple of days ago, said that we have the right to get back our Golan by all means, legal means, including by force,” Jaafari added, saying, “This is our territory, and we will get it back.”

Meanwhile, Syrian foreign ministry has urged the UN Secretary-General and the President of the Security Council to establish a clear official position on the status of the Golan Heights, local media reported.

"Syria demands UN Secretary-General [Antonio Guterres] to take an unambiguous official stance confirming the stable position of international organizations in relation to the problem of the Israeli occupation of the Syrian Golan Heights," the Syrian foreign ministry's letter to the UN secretary-general and the UN Security Council president read.

Damascus has called upon the UN Security Council to "take effective measures" that will ensure the fulfilment of the mandate to implement the resolutions stating that Israel has "to withdraw from the entire territory of the Golan Heights to the June 1967 line".

According to Damascus, the US administration has no right to decide the fate of the Syrian occupied territories, and the recognition of the Syrian land under the sovereignty of another state is viewed as an act of aggression against Damascus.

The Golan Heights is a strategically important land that has been mostly under Israel's control since it seized the area after the 1967 Six-Day War. In 1981, Israel adopted a law that officially annexed the Golan Heights, but the United Nations declared the legislation as null and void and without international legal effect. Syria has repeatedly stated the Golan Heights is an integral part of its territory, and that it will work to return it by any means necessary.

Reacting to the White House's official statement, the Syrian envoy to the UN called the Pentagon's announcement of victory over Daesh a 'bluff'.

On Wednesday, the US president claimed that the final terrorist group's enclave would be "gone by tonight". Later, reports claimed that Washington-backed SDF "liberated all of Baghouz from the Daesh mercenaries". However, the next day, Reuters reported citing a Syrian Democratic Forces' authority that the Kurdish-led group rejected claims that it captured the last Daesh stronghold in Syria.