Venezuelan FM Says Trump, Pence 'MUST GO' for Future of Humanity
TEHRAN (defapress)- Venezuelan Foreign Minister Jorge Arreaza called on US President Donald Trump and Vice President Mike Pence to step down "for the future of all humanity" in the wake of Pence's claim that Venezuelan President Nicolas Maduro "must go".
News ID: 76358 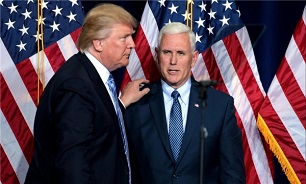 Pence wrote in his article for Miami Herald that Maduro should step down "for the future of Venezuela" amid a political crisis in the Latin American country, RIA Novosti reported.

"It's URGENT! For the future of all humanity, Donald Trump, Mike Pence, and company must go!" Arreaza wrote on Twitter on Friday.

​In January, Venezuelan opposition leader Juan Guaido, backed by the United States, declared himself the interim president of Venezuela after disputing Maduro’s re-election last May. Washington immediately endorsed Guaido, called on Maduro to step down and seized billions of dollars’ worth of Venezuela’s oil assets.

Maduro has accused the United States of trying to orchestrate a coup in order to install Guaido as a puppet leader beholden to Washington.

Also on Friday, the Venezuelan foreign ministry said in a statement US sanctions imposed on Venezuela's Bandes bank will affect almost 24 million clients, according to TASS.

"The people and government of Venezuela will continue defending their independence and political, economic and cultural sovereignty," the foreign ministry stressed.