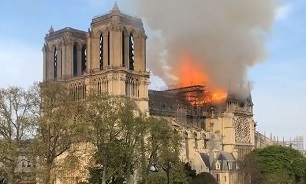 In a Tuesday tweet, the embassy wrote, “Gratitude to Minister @JZarif for his expression of sadness and solidarity with the French people, and for many similar messages received from dear Iranians.”

The embassy added that the Notre Dame Cathedral "belongs to the World Heritage and to all of those who have loved and will continue to love it."

Earlier this morning Iranian Foreign Minister Mohammad Javad Zarif expressed regret over partial destruction of Notre-Dame Cathedral in a Monday fire, writing, “Saddened that Notre Dame—that iconic monument dedicated to the worship of our one God & that brought all of us closer through Hugo's literary masterpiece—is partially destroyed after standing through wars & revolution for 800 yrs.”

The fire inside the UNESCO World Heritage site reportedly began at around 6:50 p.m. local time, according to the Paris fire department. Media reports indicate that the fire may have been started accidentally during renovation work underway inside the cathedral. Arson and terror-related motives have been ruled out by French law enforcement officials, who are treating the fire as an accident.

Laurent Nunez, French Secretary of State to the Ministry of Interior told reporters Tuesday morning that the fire which devastated Paris’ Notre Dame Cathedral Monday was "under control" but has not been completely extinguished. "There are still small outbreaks, the cooling off process is still underway, new outbreaks were reported and contained right away," CNN quoted him as saying, adding that "the risk of fire is now ruled out; now it's about the building, know how the structure will resist to this serious fire last night."