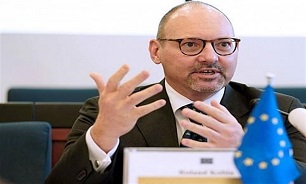 During the talks, the Iranian side stressed the need to pay attention to the pivotal role of the Afghan constitution in the peace talks and to preserve the achievements of the people of Afghanistan over the past 18 years and said peace is demanded by all the people today.

The special envoy, for his part, highlighted the common stances of Iran and the EU about the peace talks in Afghanistan and said the block is ready to cooperate with Tehran in line with efforts to promote security and peace in Afghanistan.

Iran has played a major role in international efforts to settle the existing security problems in Afghanistan.

In a meeting with the Afghan president in Kabul in late December, Secretary of Iran’s Supreme National Security Council (SNSC) Ali Shamkhani said Tehran is prepared to promote defense, military and security cooperation with Afghanistan, which he described as a friend and brother.

The withdrawal of US forces provides a golden opportunity for Afghanistan to strengthen its defense and military capabilities by relying on its own potential, the Iranian official said, adding that the US presence in the region has resulted in nothing but wars and insecurity.