top cmdr:
US to pay for its enmity towards Iran
TEHRAN (defapress) – Chief of General Staff of the Iranian Armed Forces Maj. Gen. Mohammad Hossein Bagheri said that the United States will soon pay the price of its enmities towards Iran.
News ID: 77011 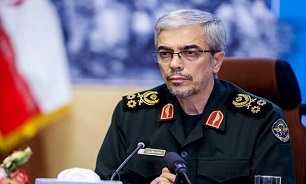 He made the remarks today in Tehran in a ceremony held to introduce the newly appointed commander of Islamic Revolutionary Guards Corps Major General Hossein Salami.

US anger against IRGC is not surprising, he said, adding that Washington showed its anger by designating the force as a foreign terrorist organization. “Criminals who support terrorists by providing weapons and financial aids are introducing IRGC as a terrorist body. And no less is expected from the enemy.”

Elsewhere in his remarks, Bagheri pointed to US recent decision to not extend sanctions waivers for buyers of Iran's oil, saying, “After 40 years, the Iranian nation has reached a level of power so as to stand on its feet with any amount of oil sales.” This can be an opportunity to reduce dependence on oil, he highlighted.

The White House announced on Monday that it will not renew sanctions waivers for countries which import Iranian crude oil. The waivers had been in place since November when the administration re-imposed sanctions on Iran after Trump unilaterally withdrew the US from the landmark 2015 nuclear deal with the Islamic Republic.