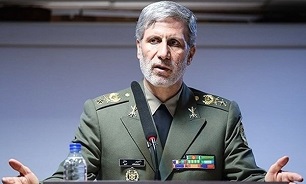 General Hatami made the remarks in a meeting with his Uzbek counterpart General Bakhodir Kurbanov on the sidelines of the eighth Moscow Conference on International Security (MCIS) on Wednesday.

In the meeting, the Iranian defense minister pointed to the deep historical and cultural ties between the two countries of Iran and Uzbekistan, calling for the development of mutual cooperation in political, economic, and specially in defense and security areas.

He further emphasized readiness of the Islamic Republic of Iran to work with the benevolent countries of the region, including Uzbekistan.

General Bakhodir Kurbanov, for his part, expressed happiness with meeting with his Iranian counterpart, stating that the political will of the leaders of the two countries can pave the way for expansion of mutual cooperation in all political, economic and cultural fields.

He underlined the common security concerns of the two countries in the region, expressing the hope that Tehran-Tashkent cooperation on countering terrorism would further develop.

In relevant remarks on Wednesday, General Hatami underlined that his country would not allow the foreign states to wage war or stir insecurity in the region again.

Elsewhere, he said Washington's designation of the Islamic Revolution Guards Corps as a "terrorist organization" was a retaliation for the IRGC's fight against the Takfiri and Zionist terrorists in the region, adding that the IRGC is highly popular in Iran and the region.