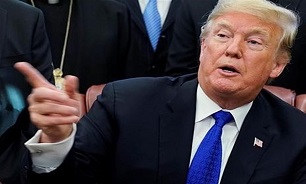 The preliminary injunction bars enforcement nationwide of a policy that was due to go into effect on May 3 over the vehement objections of abortion supporters who have decried it as a “gag rule” designed to silence doctor-patient communications about abortion options.

“Today’s ruling ensures that clinics across the nation can remain open and continue to provide quality, unbiased healthcare to women,” Washington state Attorney General Bob Ferguson said in a statement announcing the decision.

Washington state was a named plaintiff in the case challenging restrictions proposed by the US Health and Human Services Department (HHS) to its Title X program subsidizing reproductive healthcare and family planning costs for low-income women.

Neither the White House nor HHS immediately responded to requests from Reuters for comment.

The ruling by US District Judge Stanley Bastian in Yakima, in eastern Washington, capped a hearing in which oral arguments were presented by both sides.

“There is no public interest in perpetuating unlawful agency action,” Bastian wrote in his ruling.

Bastian also wrote that the “Plaintiffs have presented reasonable arguments that indicate they are likely to succeed on the merits.”

He said that the plaintiffs “are likely to suffer irreparable harm in the absence of a preliminary injunction.”

A federal judge in Oregon earlier this week said he intended to grant a preliminary injunction in a similar but separate lawsuit brought by 20 states and the District of Columbia. Two more lawsuits challenging the Title X restrictions are pending in California and Maine.

The restrictions are aimed at fulfilling Republican President Donald Trump’s campaign pledge to end federal support for Planned Parenthood, an organization that provides abortions and other health services for women under Title X.

Congress appropriated $286 million in Title X grants in 2017 to Planned Parenthood and other health centers to provide birth control, screening for diseases and other reproductive health and counseling to low-income women.

The funding is already prohibited from being used for abortions, but abortion opponents have long complained that the money in effect subsidizes Planned Parenthood as a whole.

Planned Parenthood provides healthcare services to about 40 percent of the 4 million people who rely on Title X funding annually, and the organization has argued that community health centers would be unable to absorb its patients.

Under the new rule, clinics that receive Title X funding would be barred from referring patients for abortion as a method of family planning. The regulation also would require financial and physical separation between facilities funded by Title X and those providing abortions.

Abortion opponents have argued the plan would not ban abortion counseling but would ensure that taxpayer funding does not support clinics that also perform the procedure.