North Korean Official Censures Pompeo for "Stupid, Dangerous" Remarks
TEHRAN (defapress)- A senior North Korean official denounced US Secretary of State Mike Pompeo for his “stupid and dangerous” remarks last week that the US would “change paths” should diplomacy with Pyongyang not succeed.
News ID: 77155 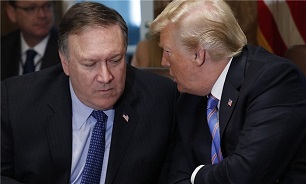 “This is a very stupid and dangerous idea of breaking down our system by using military methods as [the US] cannot break us down with the maximum pressure and economic blockade,” she said, adding, “The ‘change of path’ mentioned by the US … is not a privilege that the US has but is our choice.”

“Our will to achieve denuclearization remains unchanged and we will denuclearize in due time, but it can be possible only under the condition that the US changes its current way of calculation and re-establish its stance,” official Korean Central News Agency (KCNA) quoted her as saying

And if the US did not change its stance by the end of this year, it will "face (an) unwanted outcome", she noted.

Speaking to CBS last Wednesday, Pompeo said he believed that the path to North Korea’s denuclearization would be “bumpy” and that the US would consider alternative solutions should “good faith negotiations” and “real conversations” break down.

Just days before, director general of the North foreign ministry’s Department of American Affairs Kwon Jong Gun called on US President Trump to remove Pompeo as his top nuclear negotiator. Accusing Pompeo of “self-indulgence” and “reckless remarks”, Kwon warned that Pyongyang would be reluctant to engage in dialogue with the US should they be led by Pompeo.

Choe has also recently censured National Security Advisor John Bolton for remarks in which he said the North would need to make a “real indication” of willingness to denuclearize before a third summit takes place.

“As it was before, we have never expected that adviser Bolton would ever make a reasonable remark,” Choe reportedly said, adding that “his word has no charm in it and he looks dim-sighted to me”.

Choe on Tuesday cited North Korean leader Kim Jong Un’s remarks during a “policy speech” earlier in the month that he would be open to a third summit with Trump, but only if it resulted in a “fair” deal beneficial to the two countries.

“We know the path that we will move toward, but we are hesitating to make a choice as we set the deadline for the US,” Choe stressed on Tuesday, warning Washington of “consequences” should it decide against continuing negotiations.

Pyongyang and Washington have been at loggerheads since the collapse of a summit between Kim and Trump in February with no deal reached on the North's denuclearization.

In late February, the North Korean leader and Trump of the United States met for the second time in Hanoi, Vietnam, where no agreement was reached. In their first summit last year, the two sides reached a vague denuclearization agreement.

Washington has refused to offer any sanctions relief in return for several unilateral steps already taken by North Korea. Pyongyang, on the other hand, has suspended its missile and nuclear testing, demolished at least one nuclear test site, and agreed to allow international inspectors into a missile engine test facility.