Official:
Venezuelans to Turn Down Trump
TEHRAN (defapress)- Advisor to the Iranian Parliament Speaker Hossein Amir Abdollahian said that the people of Venezuela will disappoint US President Donald Trump who is stepping up pressures on the legitimate government of Caracas.
News ID: 77191 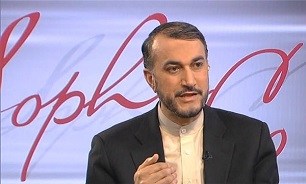 Venezuelans will turn down US President Donald Trump who is thirsty for petrodollar, and will make decisions by themselves, Amir Abdollahian said in a Thursday tweet, adding that Washington’s pressure on oil-rich country of the South America proves irreplaceability of Iranian oil.

“Mounting pressure of the US Adminstration for ‘regime change’ in oil-rich Venezuela proves Iran's oil can't be replaced. Iran will strongly continue to export oil with no limitation,” he underlined.

In a statement on Thursday night, Iranian Foreign Ministry Spokesman Seyed Abbas Mousavi condemned Washington’s interference in the internal affairs of Venezuela, censuring the US for attempting to stage a coup against the legitimate government of the South American country.

Mousavi warned Washington against any type of meddling in Venezuela, after Caracas announced that it had foiled an attempt by a number of military defectors to overthrow President Nicolas Maduro, who has been under pressure from US-backed opposition leader Juan Guaido to step down.

"The Islamic Republic condemns US attempts to stage a coup or any other type of military action in Venezuela," the Iranian diplomat underlined.

The remarks came after US Secretary of State Mike Pompeo, Defense Secretary Patrick Shanahan and National Security Adviser John Bolton expressed full support for the opposition and announced that the US military was ready to join their anti-Maduro push.

"Threatening to use force against other countries is a stark violation of international laws, particularly the United Nations Charter," Mousavi said. "We expect all members of the international community to condemn such remarks and act accordingly."

"Unfortunately the global stability is under threat by some hawkish and lawless vandals, and it is imperative that all members of the international community use what's in their power to resolve the issue," he added.

In a telephone conversation on Wednesday, Russian Foreign Minister Sergey Lavrov told US Secretary of State Mike Pompeo that American intervention in Venezuela’s political crisis amounts to a violation of international law.

Lavrov added that further “aggressive steps” in the country could have grave consequences.

Pompeo on Tuesday accused Moscow of meddling in the country by continuing to support President Nicolas Maduro, while the Russian Foreign Ministry announced that the US is waging an “information war” on Venezuela.

White House National Security Advisor John Bolton told reporters Wednesday that “all options” were on the table for the US response to Venezuela, and that the military was “ready to go”.

US-backed opposition leader Juan Guaido on Tuesday attempted to launch an uprising, but the effort fizzled when the military refused to defect in large enough numbers. Both pro- and anti-government demonstrators held rallies and street protests across Caracas, some of which led to clashes with security forces.

Acting Secretary of Defense Patrick Shanahan said during a congressional hearing on Wednesday that the Pentagon has conducted extensive planning to prepare for any scenario that could unfold in Venezuela, according to Sputnik.

"We have done exhaustive planning so there's not a situation or scenario that we don't have a contingency for," Shanahan told the House Appropriations Subcommittee.

He added that the United States is addressing the situation in Venezuela with a whole-of-government approach, which is primarily focused on imposing diplomatic and economic pressure. However, the defense chief emphasized that all options were still on the table.

Earlier on Wednesday, Russian Foreign Ministry Spokeswoman Maria Zakharova stated that the US’ actions against Venezuela are directed at demoralizing the citizens of this country through aggressive rhetoric.

"We see that the life of the Venezuelan people is deteriorating, in particular and chiefly because of the US’ actions," she said.

Protests erupted in Caracas and several other cities in Venezuela after a group of military servicemen sided with Venezuelan opposition leader Juan Guaido. According to earlier reports, during the protests, which resulted in clashes with security forces, a few dozen people were injured in the capital of the country.

Guaido posted a video on Twitter on Tuesday urging the Venezuelan military to take to the streets in order to "end the usurpation" in the country. A group of military officers and head of the Popular Will party Leopoldo Lopez appeared Guaido’s video.

National Assembly’s deputy from the state of Miranda Manuela Bolivar stated on Wednesday night that at least 78 people were injured in clashes with law enforcers during anti-government protests in the Venezuelan capital of Caracas and 89 more were arrested.

Venezuelan Minister of Defense Vladimir Padrino Lopez wrote on his Twitter account on Wednesday that at least eight law enforcers were wounded in clashes with protesters.