President Urges Unity against ‘Full-Scale, Unprecedented’ War on Iran
TEHRAN (defapress) – Iranian President Hassan Rouhani called for internal solidarity in the face of a full-scale eco-political war that the enemies have waged on the country by exerting unprecedented political and economic pressures.
News ID: 77347 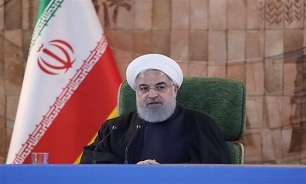 Speaking to a group of Iranian political activists in Tehran on Saturday, Rouhani said Iran needs unity and cohesiveness at the time of increased political and economic pressure, which he described as unprecedented in the history of the country since the victory of the Islamic Revolution.

He said the current wave of pressure on Iran is even more difficult than the one experienced during the Iraqi imposed war in the 1980s, Press TV reported.

“At the time of the (Iraqi imposed) war, we had no problem in banking, sale of oil and export and import and the only ban imposed on us was the arms embargo,” Rouhani said.

The president stressed, however, that the outside pressures would never cause the Iranian nation to give up, adding, “Giving in is not consistent with our culture and religion and people won’t accept it, thus we should not accept submission and we should try to find a solution.”

In comments in September 2018, Leader of the Islamic Revolution Ayatollah Seyed Ali Khamenei warned of a massive propaganda campaign mounted by the spy agencies of the US and Israel, coupled with an all-out economic war on the Islamic Republic, and urged stronger national unity in the face of enemy plots.

“Today, the Islamic Establishment is faced with an all-out economic war, which is being controlled from a war room carefully and vigorously; but besides this war, a major media and propaganda war is also underway which is generally neglected,” the Leader said, pointing to the evidence that the espionage services of the US and the Zionist regime of Israel have set up organizations with the financial support of rich regional countries to poison the minds of Iranian people.

Ayatollah Khamenei also highlighted the Islamic Republic’s progress and forward movement despite all hostile moves, saying Iran has made scientific and industrial advances and has grown in the spiritual and intellectual aspects.