Zarif Warns Trump:
N. Deal Exit Already Planned by B-Team
TEHRAN (defapress)- Iranian Foreign Minister Mohammad Javad Zarif reminded US President Donald Trump that his foreign policy on Tehran is being manipulated by a host of anti-Iran figures known as the B-Team, referring to the history of the calls for Washington’s withdrawal from the 2015 nuclear agreement.
News ID: 77379 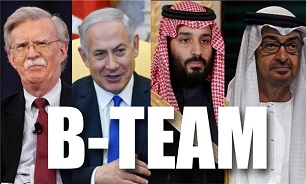 Zarif, in a tweet on Sunday, said US National Security Advisor John Bolton, along with anti-Iran figures in the United Arab Emirates, Saudi Arabia and Israel were planning to push Washington out of a multilateral 2015 nuclear deal with Iran even before Bolton was appointed to his current post.

In a post addressed to US President Donald Trump, the Iranian diplomat said, “In case you missed it, before you hired him (John Bolton), this was the plan that John Bolton and his B_Team cohorts had for Iran.”

Zarif included in his tweet the link to an article by Bolton, which was published by the National Review magazine in 2017 when he was not Trump's national security advisor, in which the hawkish American politician reflected on how the United States could get out of the Iran nuclear deal, which is officially known as the Joint Comprehensive Plan of Action (JCPOA).

“A detailed blueprint for fake intelligence, forever war and even empty offers for talks—only phone numbers were not included,” Zarif added in his tweet in what is a clear allusion to a recent CNN report, alleging that the White House has contacted Swiss authorities to share a telephone number with Iran in hopes that Tehran will contact Trump.

In return, Iran's Supreme National Security Council (SNSC) announced in a statement on Wednesday that the country had modified two of its undertakings under the Joint Comprehensive Plan of Action in return for the US abrogation of the deal and other signatories’ inability to make up for the losses under the agreement, warning that modifications would continue if the world powers failed to take action in line with their promises.

It reminded the G4+1 of Iran's good will during the nuclear talks, implementation of the nuclear deal and giving sufficient time to the other signatories to implement the deal, saying that it is now their turn to prove their good will and adopt serious and practical measures to protect the nuclear deal.

Also, another letter was sent by Zarif to EU Foreign Policy Chief Federica Mogherini on Wednesday morning to inform her of details of Iran's measures.