Advisor:
US Foreign Policy in Disarray
TEHRAN (defapress)- Advisor to the Iranian Parliament Speaker Hossein Amir Abdollahian, in a post on his Twitter page, lashed out at the US foreign policy, saying US President Donald Trump, State Secretary Mike Pompeo and National Security Advisor John Bolton will all lose in their current hawkish game.
News ID: 77380 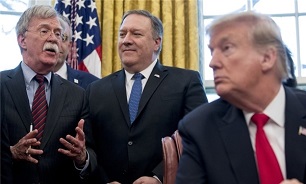 “US foreign policy is in shambles. Pompeo and Bolton are thirsting for power and Trump is hungry for money. All 3 will be the major losers of the current White House game,” Hossein Amir Abdollahian posted on his Twitter account on Sunday.

He praised Iran’s wise diplomacy in comparison with the foreign policy pursued by the hawkish politicians at the White House.

“Islamic Republic of Iran is standing fast. By practicing wise diplomacy, based on ‘heroic power’, we will win the day,” the Iranian diplomat added, featuring a cartoon of the three warmongers on fire after Iran celebrated the 40th anniversary of the Islamic Revolution’s victory in February.

Trump on Thursday conceded he has policy differences with John Bolton, even as he defended his national security adviser amid media reports he has grown frustrated with some of his hawkish foreign policy moves.

“John’s very good. He has strong views on things, but that’s OK. I actually temper John, which is pretty amazing isn't it?” Trump said during an impromptu briefing with reporters in the White House Roosevelt Room when asked if he is satisfied with Bolton’s advice, The Hill reported.

The comments come one day after The Washington Post reported Trump has groused Bolton wants to get him “into a war” in Venezuela, where the administration is backing an effort to oust Venezuelan President Nicolas Maduro in favor of opposition leader Juan Guaido, whom the US and other nations recognize as the interim president.

Bolton vocally supported a failed uprising against Maduro last week, which reportedly led Trump to question his administration’s strategy in the Latin American hot spot. Despite those tensions, Bolton’s job is not in danger, according to The WaPo.

Trump pledged to disentangle the US from foreign wars during his 2016 campaign, views that are at odds with Bolton, who has long held hawkish views and was a vocal proponent of the Iraq War.

“I have different sides,” the US president stated, noting, “I have John Bolton and I have other people who are a little more dovish than him, and ultimately I make the decision.”

Trump and Bolton have both floated the possibility of a US military intervention in Venezuela, but have declined to say which conditions would trigger such a move.