E3 FMs Criticize US Approach to Iran
TEHRAN (defapress) – European diplomats criticized the hardline US approach toward Iran and urged Washington to exercise "maximum restraint" as tensions mount in the Persian Gulf a year after the US withdrew from the 2015 nuclear deal between Tehran and world powers.
News ID: 77386 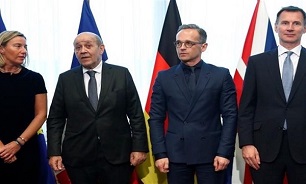 Federica Mogherini, the European Union's diplomatic chief, stressed the need for dialogue following a meeting with US Secretary of State Mike Pompeo, who made a last-minute visit to Brussels on Monday to share information on Iran.

Mogherini said the EU continues to fully support the accord, which imposed limits on Iran's nuclear program in return for sanctions relief.

"It's always better to talk than rather not to, especially when tensions arise," she said, according to Al Jazeera.

"Mike Pompeo heard that very clearly from us today, not only from myself, but also from other EU member states, that we are living in a crucial delicate moment where the most responsible attitude to take is that of maximum restraint."

The ministers from the European signatories to the nuclear accord - Germany, United Kingdom and France - all publicly criticized the hardline US approach.

Pompeo, who met individually with the ministers, but not in a joint setting, did not speak to reporters as he was entering or leaving EU headquarters.

Heiko Maas, German foreign minister, said Berlin "still regards this nuclear agreement as the basis for Iran not having any nuclear weapons in the future and we regard this as existential for our security".

Maas said he used his one-on-one meeting with Pompeo to stress that "we are concerned about the development and the tensions in the region, that we do not want there to be a military escalation".

Jean-Yves Le Drian, France's foreign minister, joined the criticism saying Washington's move to step up sanctions against Iran "does not suit us".

European countries said last week they wanted to preserve the Iran nuclear deal and rejected “ultimatums” from Tehran, after Iran relaxed restrictions on its nuclear program and threatened moves that might leave the international pact.

Iran’s move came a few days after the US administration renewed five of seven sanctions waivers that allow Russia and European nations to conduct civilian nuclear cooperation with Iran but revoked the other two as part of its pressure campaign against Tehran.

The European Union has vowed to counter US President Donald Trump’s renewed sanctions on Iran, including by means of a new law to shield European companies from punitive measures, but it has so far failed to do anything beyond making statements.