Iran’s Top Commanders Downplay US’ Military Buildup in ME as Psy-War, Warn of Crushing Response
TEHRAN (defapress)- The top commanders of Iran’s Army and the Islamic Revolution Guards Corps (IRGC) downplayed the recent deployment of the US military arsenal in the Persian Gulf a hackneyed tactic of psychological warfare frequently happening in the past 40 years, but meantime warned of Iran's crushing response in case of any hostile move by the US troops.
News ID: 77400 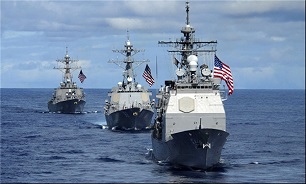 Last Sunday John Bolton, US President Donald Trump's National Security Adviser, announced that the US would send the USS Abraham Lincoln aircraft carrier and its associated strike group to the waters near Iran to "send a message" and respond to what he called as vague threats.

But analysts believe that the US will be sending the powerful carrier to a job it's arguably ill-suited for, putting thousands of sailors at a major military disadvantage. And if a conflict were to arise, the sinking of a US aircraft carrier would be in Iran's sights.

Also, military experts have said that the carrier's deployment to Iran's nearby waters may have been planned long ago.

Meantime, Secretary of State Mike Pompeo said Wednesday that the Trump administration did not want war with Iran.

Following the intensive media hype on the US’ military dispatches, senior Iranian commanders played down the moves and declared that US’ deployment of aircraft carriers and other military units to the Persian Gulf region has been a common practice of Washington in the past 40 years whenever it desired to impose a psychological pressure on Tehran.

Commander of the Islamic Revolution Guards Corps (IRGC) Major General Hossein Salami downplayed deployment of the US aircraft carriers in the Persian Gulf as psychological warfare against Iran, saying that Washington is not brave enough to launch a war.

"Dispatching the US aircraft carrier to the regional waters is nothing but psychological warfare and the US wants to intimidate people and some officials of war," Mohammad Ali Pourmokhtar, a senior Iranian legislator, quoted General Salami as saying in a closed-door session with the parliamentarians in Tehran on Sunday.

"The IRGC commander said that US war on Iran is impossible and the US lacks power and does not dare to start a war against Iran," the MP told FNA.

According to Pourmokhtar, General Salami underlined Iran's high defense power and the vulnerability of the US carriers as why Washington would not dare to take the risk of war against Iran.

On Wednesday General Salami told an event in Tehran, "Our enemies are exhausted, depressed, disappointed and defeated more than ever, yet they have not given up threatening and have turned every passage from economy and psychological operations to border insecurity into a battlefield to confront the Islamic Republic of Iran."

"Today, we are at the highest levels of confrontation against the world arrogance, and enemies have no more power and capacity to use," he added.

On Sunday night, Iranian Navy Commander Rear Admiral Hossein Khanzadi also played down the "theatrical and useless" presence of the US aircraft carriers in the Persian Gulf, stressing Iran's preparedness to defend the country against any warmongering.

"Today, speaking of the dispatch of aircraft carrier to the Persian Gulf is nothing new and they are attempting to magnify the shadow of war," Rear Admiral Khanzadi said in the Southern city of Bandar Abbas.

"Their presence in the region is theatrical and useless," he underlined.

He also addressed the Persian Gulf littoral states, saying, "The presence of Americans in the Persian Gulf region has come to an end and they should leave the region and those countries which have pinned hope on such present powers as the Americans should fill this vacuum."

Rear Admiral Khanzadi underscored that the only way to fill this vacuum is regional cooperation and creating desirable trends to increase the regional power, adding, "This will happen in the near future and there is no doubt about it."

Head of the Political Bureau of the Islamic Revolution Guards Corps (IRGC) Brigadier General Yadollah Javani said on Friday that the administration of US President Donald Trump does not dare to wage a war on Iran despite its recent deployment of an aircraft carrier and bombers in the Persian Gulf.

He said Americans think they can intimidate the Iranian nation and force officials to sit for talks by combining military rhetoric with sanctions and economic pressures. But the Iranian nation well knows the scenario, and considers the US untrustworthy.

The aggressive rhetoric the US has adopted against Iran is just part of a mechanism that the American officials have devised in line with their sanctions to make them more practical, the top general added.

Commander of the Iranian Army Ground Force Brigadier General Kiomars Heidari said on Wednesday that the armed forces of the country are enjoying full readiness in face of any potential foreign threat, saying that, currently, no external danger is posed to the country.

“Iranian armed forces have managed to ensure a real deterrent military power against foreign threats, and they have shown this power to the enemies,” Brigadier General Heidari said.

The military chief noted that the armed forces are constantly monitoring the enemies’ movements and are ready to take action against anything or anyone who wants to endanger the lives of the nation or undermine the integrity of the country.

According to him, the Iranian military is now more powerful than ever, as the country has boosted the forces’ various subcategories and different Army divisions have undergone major structural changes overhauls.