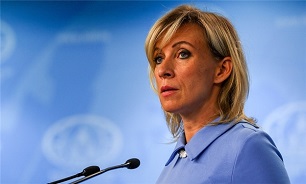 According to the diplomat, a warship of the US Coast Guard was spotted 20 kilometers off the Venezuelan port of La Guaira, TASS reported.

"This activity only aggravates the situation and does not contribute to the strengthening of trust," the diplomat stressed.

"At the same time, the radical opposition has initiated negotiations with the Southern Command of the US Armed Forces to overthrow the legitimate government," she added.

The diplomat reiterated that Moscow was urging the Venezuelan politicians to peaceful methods in the settlement of the crisis, calling inadmissible the moves triggering a civil war and violence.

She also condemned last week’s incident in which US police officers broke into the building of the Venezuelan Embassy in Washington, stating that "this is a gross violation of Article 22 and Article 45 of the Vienna Convention in regards to ensuring the protection of the diplomatic mission".

Political crisis in Venezuela worsened after in late January Juan Guaido, Venezuelan opposition leader and parliament speaker, whose appointment to that position had been cancelled by the country’s Supreme Court, declared himself interim president at a rally in the country’s capital of Caracas.

Zakharova also said Russia welcomes the readiness of the parties to the political crisis in Venezuela to hold contacts for the sake of finding a way out of the current situation.

"The current situation in Venezuela confirms there is no alternative to peaceful, civilized ways of resolving controversies by the citizens of that country. We hail the readiness of the government and the opposition to hold contacts ahead of a dialogue, including internationally mediated dialogue. We support any initiatives that accommodate the parties’ interests to an equal degree," she noted.

Zakharova added that only negotiations by all of Venezuela’s constructively-minded political forces eager to achieve a peaceful diplomatic settlement of disagreements in accordance with the Constitution were able to bring about a lasting solution of the crisis.