Iran’s Envoy:
US Policy of ‘Maximum Pressure’ Not Working
TEHRAN (defapress) – Majid Takht-e Ravanchi, the Iranian ambassador to the United Nations, said the US’ so-called policy of “maximum pressure” against Tehran has failed, adding that it has isolated Washington at the international arena.
News ID: 77539 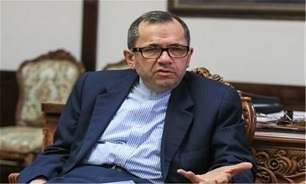 “The US policy of maximum pressure against Iran has failed. None of the Trump administration’s unjust demands has been met, and I can assure you that pressure will not work…It has isolated the United States in the international arena and created yet more division between America and its allies,” Takht-e Ravanchi wrote in a piece published by the Washington Post on Friday.

His comments come as tensions between the US and Iran escalated in recent weeks, particularly after the US administration sent a carrier strike group and a bomber task force to the Middle East amid what US officials called “troubling and escalatory indications and warnings” from Iran that had not been publicly identified.

Trump said Friday that he would send about 1,500 troops to the Middle East to counter Iran’s influence.

Following is the full text of Takht-e Ravanchi’s op-ed:

On May 2, the United States stopped granting waivers for the importation of Iranian oil. The decision was yet another step in the US economic war against Iran. The “maximum pressure” policy is designed to disrupt the Iranian economy and force Iran to enter negotiations on the United States’ terms for a new nuclear deal, substituting for the existing accord that was negotiated with the Obama administration and five world powers in 2015.

Iran rejected the latest US action as illegal, as it did last year with the US withdrawal from the nuclear deal, known as the Joint Comprehensive Plan of Action, or JCPOA. Iran regards the withdrawal as a violation of international law, including United Nations Security Council Resolution 2231.

In fact, Iran’s decision to remain in the nuclear deal, despite the US withdrawal, was prompted by requests from European nations to give them enough time to compensate Iran for what it has lost as a result of the United States unilaterally abrogating its commitments and leaving the accord.

My country has patiently waited for a year, but no tangible economic recompense has been forthcoming. Iran was left with no other option than to cease performing some commitments — such as observing limits on stockpiles of low-enriched uranium and heavy water — for two months, while still giving the remaining JCPOA members, and particularly Europe, time to finally and fully adhere to their commitments under the accord and make up for Iran’s losses. Our argument is basically that we cannot — and no one reasonably can — be expected to unilaterally honor a multilateral agreement.

The United States’ approach toward Iran has no clarity or cohesiveness. Instead, the policy is driven by an obsessional antagonism. It is no secret that a number of US high officials — and certain leaders in the Middle East — are pushing President Trump to adopt a hard-line policy toward Iran, even calling for “regime change.” This group has presented what we call “fake intelligence” to “prove” that Iran is responsible for all of the Middle East’s problems — thus the urgency to confront us at any cost, including through military means.

The recent dispatching of a US naval armada to the Persian Gulf is a response to the same fake intelligence, supported not by members of Congress or US allies. Recently, I informed UN Secretary-General António Guterres about the need to establish a security structure in the Persian Gulf. Yet, let me be clear here: While Iran does not desire war in the region, neither with the United States nor with any other country, we will stand firmly against any act of aggression against our country.

Contrary to the views of some of his close associates, Trump appears not to want a war with Iran. But his approach toward us is contradictory — at times threatening us, at others calling for dialogue.

The United States’ proposal on dialogue with Iran faces three major hurdles. First, history shows that genuine talks cannot be productive if they are coupled with intimidation, coercion and sanctions. A dialogue can succeed if both sides accept the principle of mutual respect and then act on equal footing.

Second, the Trump administration does not speak with a united voice on the need for a dialogue with Iran. Those who are eager to provoke a conflict are working to sabotage the possibility of useful and meaningful dialogue.

Finally, Trump’s sudden withdrawal from the JCPOA nuclear deal last year with no good reason — and to the disapproval of almost the entire international community — stirs concerns that any future deal might face the same fate, with no guarantee to the contrary.

This month, Trump said that the United States “is not looking to hurt Iran.” On May 20, however, he claimed that Iran’s “economy continues to collapse — very sad for the Iranian people.” This is clear evidence that the United States is determined to hurt the Iranian people, a crime under international law. Under these circumstances, how could any rational nation trust a US offer of dialogue?

The US policy of maximum pressure against Iran has failed. None of the Trump administration’s unjust demands has been met, and I can assure you that pressure will not work. So, what has the maximum-pressure policy accomplished? It has isolated the United States in the international arena and created yet more division between America and its allies. The policy has also stoked resentment toward the United States among Iranians from all walks of life. Yes, the illegal sanctions have hurt the Iranian people, but the sanctions have not changed Iran’s policies.

Throughout history, Iranians have always resisted the imposition of others’ will and have survived for millennia. That is self-evident to any historian. The language of threats and intimidation is anathema to Iranians, who have always demonstrated that respect begets respect.