Top Bahraini Cleric Warns Arab States against Backing ‘Deal of Century’
TEHRAN (defapress) – Sheikh Isa Qassim, the spiritual leader of Bahrain’s Shiite majority, deplored the US government’s so-called “deal of the century” plan as “a crime”, warning that Arab states’ support for the plan will bring them shame and dishonor.
News ID: 77576 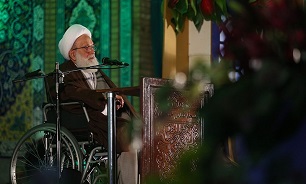 “The deal of the century was raised by (US President Donald) Trump and (Israeli Prime Minister Benjamin) Netanyahu, and some Arab governments have been cooperating with it and taken the responsibility for its implementation,” Sheikh Qassim said in a speech, according to the Arabic-language al Mayadeen.

He further described the plan as “a crime”, saying that it would bring disgrace on all those who are complicit in it and support it.

“This deal is one of the crimes and conspiracies formed against the Palestinian cause,” the top cleric said, adding that no government has legal or religious authority to speak about this deal on behalf of the Palestinians.

The US president has long been talking about a “deal of century” for the so-called peace agreement between Israelis and Palestinians.

Trump’s “peace plan” has been dismissed by Palestinian authorities ahead of its unveiling at the end of the holy fasting month of Ramadan and the formation of the new Israeli cabinet, most likely in June.

Last week, a leader of the Palestinian Islamic Jihad movement condemned an upcoming US-Israeli conference in Bahrain as a plot to pave the way for implementation of “the deal of century”, calling on Muslims to stand up against such plots aimed at consigning the Palestinian issue to oblivion.

The White House announced on May 19 that Bahrain will host a workshop on June 25-26 in the capital Manama, where “government, civil society and business leaders will share ideas, discuss strategies and galvanize support for potential investments and initiatives that could be made possible by a peace agreement.”

The announcement came as a surprise to Palestinian officials in Ramallah and Gaza. They said that they were not consulted about the conference and stressed that the only way to solve the Israeli-Palestinian conflict was through a political, and not economic, solution.

Khalil al-Hayya, a senior member of the political bureau of Hamas, said on Friday that Palestinians have united to reject the so-called “deal of the century” plan, saying there is a consensus among them to restore the Palestinians’ rights.

“Our nation has a common stance on the boycott of the Bahraini conference and the struggle against the deal of the century and conspiracy to eliminate Palestine,” he said.