Iran Dismisses OIC Statement, Hits Back at Saudis
TEHRAN (defapress) – Iran’s Foreign Ministry condemned a statement of the Organization of Islamic Cooperation (OIC) meeting in Saudi Arabia for raising baseless allegations against Tehran, saying Saudis have misused their position as the host to mobilize the Arab states against Iran.
News ID: 77613 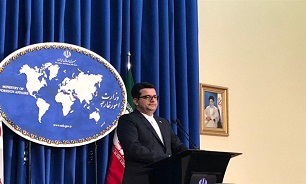 In a statement on Friday, Foreign Ministry Spokesman Abbas Mousavi dismissed a communiqué that certain leaders of Arab and Persian Gulf countries have issued at the OIC meeting to raise groundless allegations against the Islamic Republic.

He also deplored Saudi Arabia’s move to take advantage of hosting the OIC summit in the holy city of Mecca to foment division among the Muslim countries.

The Islamic Republic of Iran is confident that such statements do not reflect the real views of all OIC members, the spokesman noted, adding, “Saudi Arabia took political and instrumental advantage of the auspicious month of Ramadan and the holy city of Mecca to make accusations against the Islamic Iran from the mouth of some participants in the conference.”

Mousavi also denounced the Riyadh regime for adopting a wrong approach and creating division among the Islamic and regional countries – a favorite move for Israel - instead of taking the International Quds Day’s opportunity and using the OIC summit to support the rights of Palestinian people and the city of al-Quds.

“We deem the Saudi efforts to mobilize the views of neighboring and Arab countries a continuation of the indecisive process that the US and the Zionist regime are pursuing against the Islamic Republic of Iran,” he deplored.

Mousavi finally expressed the hope that Saudi Arabia’s failure to support the cause of Palestine and also the wrong approach adopted by certain Islamic countries in the region would be compensated at the OIC summit in Mecca and that the participants would not allow the issue of Palestine and al-Quds to be overshadowed by such “divisive policies and strategic mistakes.”

“The Zionist regime of Israel’s old objective is to make the Islamic and Arab countries neglect their main and common enemy and to pit them against each other,” the Iranian spokesman concluded.

In comments on Thursday, head of Iran’s delegation at the OIC meeting dismissed the accusations made by Saudi Arabia’s foreign minister that Tehran was interfering in the internal affairs of others.

“The Islamic Republic of Iran rejects the (Saudi) allegations made at the (OIC) summit, and hopes, as a founder of the Organization of Islamic Cooperation, that the summit held in the holy month of Ramadan would strengthen unity of the Islamic Ummah (community) and concentrate on the Islamic world’s overriding subject, namely the issue of Palestine,” Reza Najafi had announced.

In an address to a ministerial meeting on the sidelines of the 14th OIC summit on Wednesday, Saudi Arabia’s Foreign Minister Ibrahim Abdulaziz Al-Assaf had called on Islamic nations to reject Iran's (alleged) interference in the internal affairs of the other countries.