Russia raps INSTEX failure in bypassing sanctions
TEHRAN (defapress) – The Instrument in Support of Trade Exchanges (INSTEX), an EU's mechanism for financial settlements with Iran, gives no experience of bypassing the sanctions, Russia’s Permanent Representative to the European Union Vladimir Chizhov said in criticism of the mechanism on Friday.
News ID: 77691 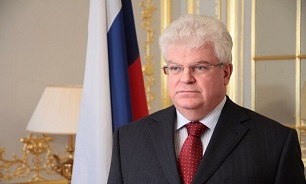 "The mechanism is in place but so far it has not gained momentum. The only thing it can now boast is that it is finally yielding some deals. But these are deals on food products which are not covered by the sanctions anyway," he told TASS on Friday.

"So, it gives no experience of bypassing the sanctions," the Russian diplomat noted. "Naturally, it is logical to ask: well, if it was created to pay for the goods not falling under the sanctions, then is this mechanism needed at all? My European colleagues keep on telling that this is just the beginning…"

But Iran may run out of patience after all, Chizhov argued. "The Iranians have already given to understand that they may take certain steps and timed this statement to the first anniversary of the United States’ withdrawal from the Joint Comprehensive Plan of Action (JCPOA). But these steps don’t go beyond the JCPOA and the announcement of the reciprocal measures fit into the deal so far," he stressed.

The Russian Permanent Representative to the European Union Vladimir Chizhov also told Interfax news agency that Russia is holding talks with European countries on being included in the INSTEX trade mechanism with Iran.

Meanwhile, a year after the US withdrawal, Iran announced its decision to suspend some of its obligations under the JCPOA and give a 60-day ultimatum in a bid to encourage the remaining sides to the agreement to take some practical measures in preserving the deal and guaranteeing Iran's economic interests.