Qatar:
Iran, US Not Looking for War
TEHRAN (defapress) – Qatari Foreign Minister Sheikh Mohammed bin Abdulrahman al-Thani said Tehran and Washington are not looking for war, and therefore both sides should move towards dialogue.
News ID: 77706 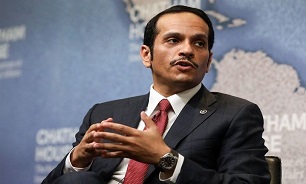 “We believe that at one point there should an engagement – it cannot last forever like this,” he told reporters in London on Sunday, Reuters reported.

“Since they are not willing to engage in further escalation, they should come up with ideas that open the doors.”

Sheikh Mohammed said several countries including Qatar, Oman Iraq and Japan had been urging de-escalation with the two sides.

“All these countries are concerned what escalation could lead to,” he said. “There were attempts by Qatar and by other countries in the region to de-escalate the situation: we have been speaking to the US and we have been talking to the Iranians as well.”

“What we are trying to do is really to bridge the gap and create a conversation between the two parties as escalation is not going to benefit anyone in the region,” he said.

Tensions between Washington and Tehran have been rising since US President Donald Trump withdrew the US from the nuclear deal, known as the Joint Comprehensive Plan of Action (JCPOA), and imposed unilateral economic sanctions against Iran, mainly targeting its energy dealings on the global market.