EU’s Mogherini:
INSTEX May Soon Be Ready
TEHRAN (defapress) – European Union Foreign Policy Chief Federica Mogherini said INSTEX -a payment channel that the three EU signatories to the JCPOA have set up to maintain trade with Iran, is expected to be launched in the near future.
News ID: 77874 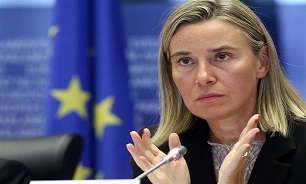 "The deal in itself has mechanisms and steps that can be taken in case of non-compliance with the agreement but the focus is to keep the agreement in place," the EU foreign policy chief stressed.

"We have been working a lot with our member states a mechanism to allow legitimate trade with Iran. I believe now this is ready to be operational and I hope that this is something that can help Iran (remain) compliant with the agreement as it has done so far," Mogherini said.

INSTEX is planned to be based in Paris and be managed by a German banking expert. Britain will head the supervisory board.

On May 8, 2018, US President Donald Trump pulled his country out of the 2015 nuclear deal between Tehran and world powers.