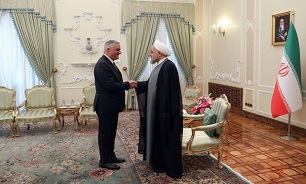 Making the remarks at Wednesday’s cabinet session, Rouhani said that “from July 7, Iran will start its measures [to reduce commitments to JCPOA] and if you [Western countries] want to express regret or to issue statements then, do it now.”

Iran’s level of uranium enrichment will no longer be 3.67 percent after this deadline, he highlighted, adding, “we will abandon this commitment and will increase the enrichment level to the level required.”

“Return to logic, the negotiating table, mutual understanding, respect for the law and the UN Security Council's resolutions, and under these conditions we all will abide by the JCPOA. We will remain committed to the deal as long as the other parties live up to their commitments.”

Remaining signatories to the deal ask Iran to remain in it, he said, adding, “if this is a good deal then why don’t Europe and US stick to their commitments? And if this is a bad deal then why they create such media fuss when Iran wants to reduce parts of its commitments in line with the deal?”

As announced before, Iran will quickly return to all its commitments if other parties do what they are required to do, Rouhani said, adding that regarding the increased enriched uranium production, Iran will sell them to another country such as Russia to receive yellow cake instead.

Other parties to the deal cannot object Iran for its recent measures since Tehran has extended the deadline several times upon the request of European leaders, he added.

Rouhani also described the EU-established financial mechanism, INSTEX, as a ‘just for show’ measure. “Today, INSTEX is just a money-less mechanism. Empty INSTEX is worth nothing but if it becomes active and it can bring the money of Iran’s oil exports, then despite all its drawbacks, the mechanism can be somewhat accepted.”

Under the JCPOA, Iran undertook to put limits on its nuclear program in exchange for the removal of nuclear-related sanctions. However, Washington began re-imposing even stricter unilateral sanctions on Tehran since May last year.

The International Atomic Energy Organization confirmed on Monday that Iran’s enriched uranium stockpile exceeded the Nuclear Deal’s limits. Zarif tweeted on Monday that Iran has not violated the JCPOA. “We triggered & exhausted para 36 after US withdrawal. We gave E3+2 a few weeks while reserving our right. We finally took action after 60 weeks. As soon as E3 abide by their obligations, we'll reverse.”

Iran says its countermeasures fit within its rights under paragraphs 26 and 36 of the nuclear deal, and that it will reverse the measures once its demands are met.

European signatories to the deal have established a special trade mechanism called INSTEX (Instrument in Support of Trade Exchanges) which they claim on Friday that it has become operational. The mechanism will initially cover trades of food, medicine and medical devices and to gradually include other areas.

Tehran says the channel is not sufficient and doesn’t meet the needs of the country which is faced with US sanctions. Iranian officials insist that EU should honor its JPCOA commitments in trading and banking sectors, and should provide the ground for Iran’s oil export.