Russia Says Submarine Hit by Fire Was Nuclear-Powered
TEHRAN (defapress) – Russian Defense Minister Sergei Shoigu said on Thursday that a top-secret military submarine that was hit by a fatal fire on board earlier this week was nuclear-powered.
News ID: 77969 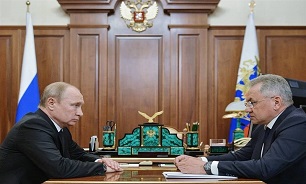 In comments published on the Kremlin’s website, Shoigu told President Vladimir Putin that the incident that killed 14 sailors was caused by a fire in the battery compartment and that the nuclear reactor on board had been completely isolated, Reuters reported.

The vessel caught fire near the naval base of Severomorsk on Monday, and the sailors died of smoke inhalation, Russia's defense ministry said in a statement.

On Tuesday, Putin called the incident a "great loss," canceled a scheduled event, and called an urgent meeting with his defense minister.

He also ordered an inquiry into the accident and asked Shoigu to "personally receive reports" on it.