Trump Rails against Fox News, Says Watching It Worse Than CNN
TEHRAN (defapress) – US President Donald Trump slammed Fox News — his preferred cable news network — for "loading up with Democrats" and for citing the "fake" New York Times in its reporting.
News ID: 78011 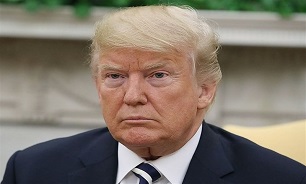 In a series of tweets on Sunday evening, Trump lashed out at the right-wing news outlet for its weekend coverage, saying watching it is "worse than watching low ratings Fake News CNN" or NBC News anchor Brian Williams.

"Like CNN, NBC is also way down in the ratings. But @FoxNews, who failed in getting the very BORING Dem debates, is now loading up with Democrats & even using Fake unsourced @nytimes as a 'source' of information."

He added: @FoxNews is changing fast, but they forgot the people who got them there!"

In prior tweets on Sunday, Trump railed against the New York Times for its "phony and exaggerated accounts" of disease and overcrowding at a Border Patrol facility in Clint, Texas, located at the frontlines of the US-Mexico border crisis.

The report compiled dozens of interviews by Border Patrol agents and supervisors, as well as detainees, lawyers, lawmakers, and aides who visited the facilities, and referred to the site's condition as "the stuff of nightmares."

"We are confident in the accuracy of our reporting on the US Border Patrol's detention centers," the Times responded in a tweet.

Members of the Trump administration also defended conditions at the US border after the New York Times published its report on Saturday.

Kenneth Cuccinelli, acting director of the US Citizenship and Immigration Services, appeared on "Fox News Sunday" earlier on Sunday and asserted that facilities he visited in El Paso, Texas were being operated safely, but admitted that the facilities were overcrowded.

"It was being run well, it was run safely, and so forth, but once you're over those capacity points, you encounter problems," Cuccinelli said.

He also took aim at Congress for not doing more to solve the crisis, despite lawmakers reaching a $4.6 billion agreement last month for humanitarian aid to overwhelmed agencies operating on the southern border after months of political turmoil.

"People in the House come down and complain about them while not helping fix the problem," Cuccinelli said. "It's the height of hypocrisy."