Iranian Commander Warns US against Any Wrongdoing in Regional Waters
TEHRAN (defapress) – A lieutenant commander of the Islamic Revolution Guards Corps (IRGC) warned that all US military vessels in the Middle East are within the range of Iranian missiles and in case of any wrongdoing, they would be targeted.
News ID: 78026 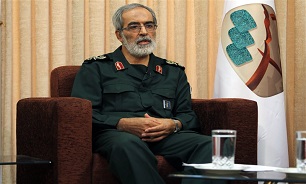 Addressing a gathering in the northwestern city of Tabriz on Tuesday night, Brigadier General Hossein Nejat highlighted the country’s military achievements and said Iran, which used to import weapons from foreign countries and hosted 5,000 American military advisers before the 1979 Islamic Revolution, has now come to a point where it can produce short and long-range missiles.

The enemies do not have the capability to counter the missiles, the IRGC commander added.

If the US Navy vessels in the region make any wrongdoing, Iranian missiles can hit even their aircraft carriers, he stressed.

Brigadier General Nejat also warned regional Arab states and said if any attack against the Islamic Republic is mounted from a neighboring Arab country, the missiles will target all their bases.