Assad Says Talks on Post-War Syria Constitution to 'Continue'
TEHRAN (defapress) – Syria's President Bashar Assad said discussions would "continue" over the composition of a body to draw up a post-war constitution for the Arab country.
News ID: 78063 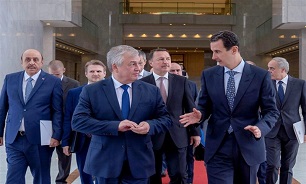 Assad and Moscow's representative "agreed to continue working and intensely coordinate between both sides on the next steps", it said in a statement.

On Wednesday, the Syrian government and visiting UN envoy Geir Pedersen announced "progress" towards forming the body, whose composition has dragged for more than 17 months.

Disagreements have raged over the names to be included in the committee, a third of which are to be nominated by the government, another by the opposition, and a final third by the UN envoy.

Damascus hopes to amend the current constitution, while the opposition wants to write a new one from scratch.

The UN envoy met the Syrian Negotiation Commission opposition grouping late Thursday "to discuss the results of Pedersen's latest visit to Damascus", it said on Twitter, without further details.

According to local reports, a body could start work as early as September if Damascus agreed to Pedersen's list.