President Rouhani Lauds Iranians’ Resistance against US Sanctions
TEHRAN (defapress) – Iranian President Hassan Rouhani highlighted the failure of US plots against the Islamic Republic and said despite facing 14 months of severest sanctions, the Iranian people have stood firm and not retreated from their positions.
News ID: 78066 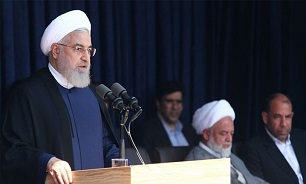 “For 14 months, the world’s biggest economic and military power has imposed the severest sanctions on Iran,” Rouhani said, addressing a gathering of people in the northeastern city of Shirvan in North Khorasan Province on Sunday.

“If these sanctions had targeted any other nation, they would have knocked down that nation, but Iran's people are standing firm,” he added.

Rouhani further emphasized that the US government has been defeated in any path it chose to hit the Iranian nation.

At the United Nations and the International Atomic Energy Agency (IAEA) no country trusted US claims against the Islamic Republic, he went on to say.

The IAEA held a special meeting on Wednesday at Washington’s request to win the Board of Governors’ support for its anti-Iran claims about the 2015 nuclear deal known as the Joint Comprehensive Plan of Action (JCPOA).

The emergency meeting of the 35-member Board of Governors of the IAEA was held in Vienna to discuss Iran’s nuclear program, which wrapped up with no conclusion.

The meeting came a few days after Iran increased the level of its uranium enrichment to 4.5%, which is beyond the limit set by the JCPOA. The move was part of the second phase of the country’s May 8 decision to reduce its commitments under the multilateral 2015 nuclear deal in reaction to the US violations and Europe’s inaction.