Leaked Cables:
Trump Scrapped JCPOA to ‘Spite Obama’
TEHRAN (defapress) – Kim Darroch, the former UK ambassador to the US, said the Trump administration was "set upon an act of diplomatic vandalism" in its decision to abandon the 2015 nuclear deal between Tehran and world powers, according to leaked cables.
News ID: 78069 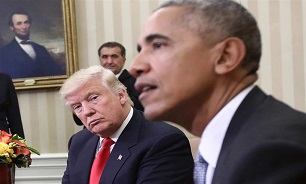 According to the Daily Mail on Saturday, the former ambassador said Donald Trump seemed to be discarding the Iran nuclear deal for "personality reasons," as the deal had been agreed to by former President Barack Obama.

The paper also reported that Darroch hinted at discord brewing between Trump's closest aides and said the White House had failed to produce a "day-after" plan on how to handle the aftermath of withdrawing from the deal.

Trump said Monday that the White House would no longer deal with Darroch, and the UK Foreign Office announced Darroch's resignation Wednesday. The former ambassador made his decision to step down after seeing that Boris Johnson, the current frontrunner to replace Theresa May as British Prime Minister, had refused to support him during Tuesday night's leadership debate, a British government official said.

A UK Foreign Office spokesman told CNN on Saturday that whoever leaked the cables "should face the consequences of their actions."

Police in the UK have opened a criminal investigation into the leaked diplomatic cables that led to Darroch's departure. Metropolitan Police Assistant Commissioner Neil Basu said Friday that there is a "clear public interest in bringing the person or people responsible to justice."

At the time the US withdrew from the deal, senior Trump administration officials -- including Secretary of State Mike Pompeo and the Director of National Intelligence Dan Coats said Iran was adhering to its commitments under the deal.

Earlier this week, Trump tweeted that Iran "has long been secretly 'enriching'," a claim that has been contradicted by the International Atomic Energy Agency, whose monitors were tasked with ensuring that Iran was complying with the terms of the 2015 deal, as well as by independent experts and by Trump's own top intelligence officials.

Iran maintains that the new measures are not designed to harm the JCPOA, but to save the accord by creating a balance in the commitments.