Ansarullah:
No Halt in Counterattacks Until Saudi War on Yemen Ends
TEHRAN (defapress) – The spokesman for the Houthi Ansarullah movement made it clear that Yemen’s retaliatory attacks will go on as long as the Saudi-led military coalition continues to bomb the people of Yemen.
News ID: 78086 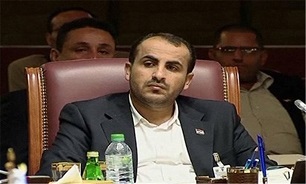 In a post on his Twitter account on Monday, Mohammad Abdul-Salam said a halt to the retaliatory attacks would depend on an end to the Saudi war against Yemen and lifting of the blockade.

“The Yemeni nation’s attacks will not stop unless the American-Saudi coalition halts the aggression and lifts the blockade (on Yemen). Anything else would be an illusion,” he underlined.

Abdul-Salam also described the Yemeni retaliatory attacks against the aggressors as an act of “legitimate defense”.

Yemen’s defenseless people have been under massive attacks by a coalition led by the Saudi regime for more than four years but Riyadh has reached none of its objectives in Yemen so far.