Iranian Armed Forces Reject Trump’s Claim on Downing Drone
TEHRAN (defapress) – A senior spokesman for the General Staff of the Iranian Armed Forces vehemently dismissed US President Donald Trump’s claim about the downing of an Iranian drone over the Strait of Hormuz, saying such claims are rooted in Trump’s illusions.
News ID: 78108 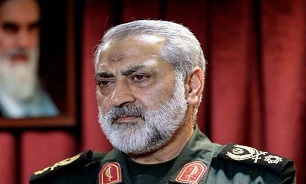 “Contrary to the false claim rooted in Trump’s illusions, all Unmanned Aerial Vehicles (UAVs) of the Islamic Republic of Iran in the Persian Gulf and the Strait of Hormuz…, have returned safely to their bases after completing their scheduled reconnaissance and patrol missions,” Brigadier General Abolfazl Shekarchi said in a statement on Friday.

The top general added that no report has been received on a counter operation by the USS Boxer, an amphibious assault ship.

He further described Trump’s unfounded claim as part of his efforts to increase tensions and insecurity in the Persian Gulf region and the strategic Hormuz Strait.