China Blasts US for Banning Firms Allegedly Linked to Iran
TEHRAN (defapress)- Beijing slammed Washington’s recent move to impose sanctions on Chinese firms over the allegation that they are linked to the Iranian nuclear energy program.
News ID: 78121 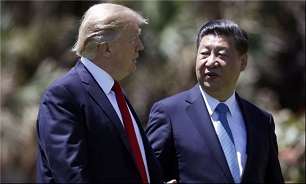 “We urge the US to immediately correct this wrong practice and earnestly respect the legitimate rights and interests of all parties,” Chinese Foreign Ministry Spokesman Geng Shuang said at a Friday press briefing, after the US Treasury Department announced new sanctions targeting Iranian, Belgian, and Chinese companies for allegedly serving as “procurement network” for Iran’s nuclear energy program.

Geng added that Washington’s campaign of “extreme pressure” against Tehran through sanctions and the policy of “long-arm jurisdiction” was the “root cause” of heightening tensions between the US and Iran.

Tensions between Washington and Tehran hit a new high in June after the US sent a number of military aircarft to the Iranian skies under a tense climate of escalating threats, forcing the Islamic Revolution Guards Corps (IRGC) Aerospace Force to shoot down one of the intruding American aircraft.