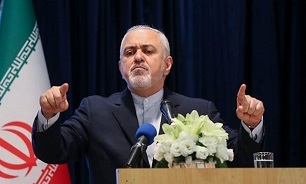 In two successive tweets on Friday, Zarif said the US cannot change the fact that global power is shifting in favor of Iran, Russia and China by resorting to sanctions and killing deals, advising Washington to, instead, adapt to the new realities on the world stage and “stop isolating itself”.

The Iranian foreign minister made the comments hours after the US officially withdrew from the Intermediate-Range Nuclear Forces (INF) Treaty with Russia — a landmark Cold War-era arms control agreement signed between the two sides in 1987.

This came shortly after the US imposed a new set of sanctions against Russia over its alleged role in the poisoning of an ex-spy in the UK in 2018.

On Thursday, US President Donald Trump also announced plans to impose an additional 10% tariff on $300 billion worth of Chinese imports starting next month as part of an ongoing trade conflict with China.

Washington has likewise abandoned a multilateral deal on Iran’s nuclear program and unleashed harsh economic sanctions against the Islamic Republic.

The “US should stop isolating itself and adapt to new global realities. International commerce and power are shifting: neither economic terrorism against China and Iran nor exiting INF Treaty with Russia will reverse that,” Zarif said in one of the tweets on Friday.

In a follow-up tweet, the top diplomat criticized the US for its anachronistic practice of attempting to contain what it perceives as “Great Powers” — now through sanctions.

Along with the tweet, Zarif provided a screenshot of a Daily Telegraph news item dating back to April 19 about US Secretary of State Mike Pompeo’s appeal to the NATO military alliance for unity against what he called “great power” challenges from Russia, China and Iran.

Pompeo was using the classic concept of great-power competition — which refers to a specific pattern of relations between rival powers in the 19th and early 20th centuries.

In his first tweet, Zarif also pointed to the Iranian initiative for a non-aggression pact among Persian Gulf countries in an attempt to end tensions in the strategic region.

The Iranian foreign minister hailed the progress in that proposal, which he said has led to the isolation of a hawkish group of politicians and regional leaders trying to pressure and isolate Iran by undermining the 2015 nuclear deal with Iran and instigating regional tensions.

Zarif expressed Iran's readiness for a non-aggression pact during a visit to Iraq in late May, amid heightened tensions between Tehran and Washington.

He said back then that Tehran sought the best of relations with the Persian Gulf littoral countries and would welcome any proposals for dialog and de-escalation toward that end.