Zarif:
Iran Won’t Hesitate to Act in Face of Extra-Regional Forces
TEHRAN (defapress) – Iran’s Foreign Minister Mohammad Javad Zarif slammed efforts by the US to create a so-called international maritime patrol force in the Persian Gulf, stressing that the country “will not hesitate to safeguard its security” in the face of any “extra-regional” military forces.
News ID: 78332 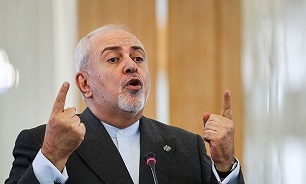 “Persian Gulf is vital lifeline and thus nat'l security priority for Iran, which has long ensured maritime security. Mindful of this reality, any extra-regional presence is by definition source of insecurity - despite propaganda. Iran won't hesitate to safeguard its security,” Zarif wrote on his Twitter late on Friday.

It came after Israeli Foreign Minister Israel Katz said on Tuesday that Tel Aviv would join the US-led coalition “protect the security of the Persian Gulf”.

Earlier on Friday, Iranian Foreign Ministry spokesman Abbas Mousavi pointed to “illegitimate existence” of the Israeli regime in the Middle East as a source of insecurity and instability.

He highlighted that Iran considers possible Israeli presence in the coalition in the Persian Gulf as a clear threat to its national security, and reserves the right to counter it.

"The US regime and the illegitimate Zionist regime are responsible for all the consequences of this dangerous move," the spokesman added.

On Thursday, Iranian Defense Minister Brigadier General Amir Hatami warned against the consequences of a maritime coalition force the US plans to create in the Persian Gulf, stressing that regional security comes within the purview of regional states alone.