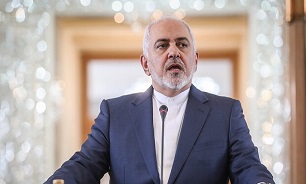 In a Thursday tweet, right after report of releasing supertanker Grace 1 by Gibraltar, Zarif took to Twitter and wrote, “Having failed to accomplish its objectives through its Economic Terrorism—including depriving cancer patients of medicine— the US attempted to abuse the legal system to steal our property on the high seas.”

“This piracy attempt is indicative of Trump admin's contempt for the law,” he highlighted.

Despite all US pressures, Gibraltar’s government released on Thursday the Iranian-operated supertanker, which was seized by British marines in the Strait of Gibraltar on July 4.

Earlier on Thursday, Gibraltar said that the US had applied to seize the Iranian-operated oil tanker after British media reported that the vessel’s release was imminent following a set of diplomatic exchanges between Tehran and London.

Zarif said the letter had “Protested the illegal detention of Grace1; Repeated public statements about destination; & Made it crystal clear that EU sanctions do NOT apply to Iran—a position shared by most Europeans.”

“Nothing changes the fact: detention was 100% unlawful,” he stressed.