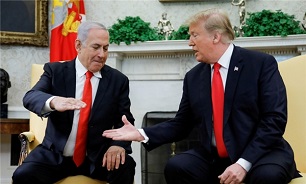 The Tel Aviv regime on Thursday listened to the US leader and barred Rep. Ilhan Omar (D-Minn.) and Rep. Rashida Tlaib (D-Mich.) from traveling to the occupied territories over their support for a boycott of Israel, World News reproted.

"It would show great weakness if Israel allowed Rep Omar and Rep Tlaib to visit," Trump said in a tweet on Thursday, adding, "They hate Israel and all Jewish people, and there is nothing that can be said or done to change their minds."

Later, He doubled down on his decision to pressure the Tel Aviv regime to bar two US Muslim congresswomen from visiting the country, labeling them “anti-Israel".

“I’m only involved from the standpoint of they are very anti-Jewish and they’re very anti-Israel," Trump said of Omar and Tlaib.

Omar blasted Netanyahu on Thursday over Israel's decision, calling it “an insult to democratic values”.

“It is an affront that Israeli Prime Minster Netanyahu, under pressure from President Trump, would deny entry to representatives of the US government," Omar said in a statement.

“Trump’s Muslim ban is what Israel is implementing, this time against two duly elected Members of Congress. Denying entry into Israel not only limits our ability to learn from Israelis, but also to enter the Palestinian territories,” she added.

Omar argued that the decision "is not a surprise" given Netanyahu's past remarks, asserting that he "has consistently resisted peace efforts, restricted the freedom of movement of Palestinians, limited public knowledge of the brutal realities of the occupation and aligned himself with Donald Trump".

Tlaib on Thursday shared a photo of her grandmother, who lives in the West Bank.

"The decision by Israel to bar her granddaughter, a US Congresswoman, is a sign of weakness b/c the truth of what is happening to Palestinians is frightening," Tlaib wrote in a tweet alongside the photo of her grandmother.

Rep. Alexandria Ocasio-Cortez (D-N.Y.) tore into Netanyahu, stating, “[Members of Congress] are frequently asked to visit Israel to ‘see things for ourselves’, but Netanyahu choosing to ban the only 2 Muslim women in Congress from entering tells the US that only *some* Americans are welcome to Israel, not all.”

House Speaker Nancy Pelosi (D-Calif.) on Thursday criticized Israel’s decision not to allow Tlaib and Omar to visit, calling the move a “sign of weakness”.

“Israel’s denial of entry to Congresswomen Tlaib and Omar is a sign of weakness and beneath the dignity of the great State of Israel,” Pelosi said in a statement.

“The President’s statements about the Congresswomen are a sign of ignorance and disrespect, and beneath the dignity of the Office of the President," she added.

Congressional lawmakers warned that the highly unusual Israeli move threatens to upend relations between the United States and Israel, while some described the development as unprecedented.

“I can't think of any other president, Democrat or Republican, doing something as outrageous as this,” said Rep. Mark Pocan (D-Wis.), a co-chairman of the Congressional Progressive Caucus, noting, “If this is just providing cover for Netanyahu, that's wrong. If this is Donald Trump playing politics, that's wrong.”

“Once again, Donald Trump is denigrating the office of the presidency,” he added.

“Israel should stand up to President Trump and allow our colleagues to visit,” tweeted Michigan Rep. Justin Amash, a Palestinian American who left the Republican Party this year after declaring Trump should be impeached.

“Nobody has to agree with their opinions, but it will inevitably harm US-Israel relations if members of Congress are banned from the country,” Amash added, saying, “We must find ways to come together; there’s enough division.”

Rep. David Cicilline (R.I.), the head of the Democrats’ messaging arm, stated that “this is a grave mistake by the Israeli government”.

A number of 2020 Democratic candidatures, including Senators Bernie Sanders (I-Vt.) and Elizabeth Warren (D-Mass.), also slammed Israel over the decision.

“Israel doesn't advance its case as a tolerant democracy or unwavering US ally by barring elected members of Congress from visiting because of their political views,” Warren tweeted, adding that “this would be a shameful, unprecedented move. I urge Israel’s government to allow @IlhanMN and @RashidaTlaib entry.”

"Anti-Semitism is not some abstract idea to me. It is very personal. It destroyed a good part of my family. I absolutely reject Trump's disgusting efforts to exploit fear of anti-Semitism to attack my colleagues," sanders said.

The US president last month had again targeted Omar, Tlaib and two other Democratic congresswomen of colour with racist attacks, saying the four politicians should "go back" to where they came from.

Tlaib, 43, who was born in the United States, draws her roots to the Palestinian village of Beit Ur al-Fauqa in the occupied West Bank. Her grandmother and extended family live in the village. Omar, 37, who immigrated to the US from Somalia as a child, represents Minnesota's fifth congressional district.