IRGC Commander:
Arrogant Powers Succumbing to Iran’s Resistance
TEHRAN (defapress) – The deputy commander of the Islamic Revolution Guards Corps (IRGC) reacted to the recent release of an Iranian oil tanker in Gibraltar despite US request to detain the vessel and said all arrogant powers are succumbing to the Islamic Republic’s resistance.
News ID: 78401 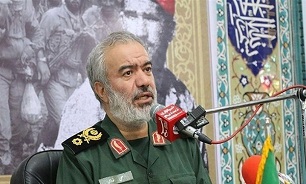 “All of the world’s arrogant (powers) are definitely succumbing to the righteous front’s resistance and obeying it,” Rear Admiral Ali Fadavi told Tasnim on Friday.

The authorities in Gibraltar on Thursday released the Iranian vessel, Grace 1 (now known as Adrian Darya), defying a US request hours earlier to seize the ship. They also released the ship’s crew from detention.

On July 4, the British Royal Marines seized the giant Iranian oil tanker in Gibraltar for trying to take oil to Syria allegedly in violation of EU sanctions.

Tehran maintained that the supertanker was not bound for Syria and its seizure has taken place at the behest of the US.

Iran’s Foreign Ministry had summoned the British envoy to Tehran several times in protest at the UK navy’s move.

Iranian President Hassan Rouhani had warned London that it will definitely pay the price for the illegal seizure of Grace 1 in international waters.