UN Slams Saudi Arabia, UAE over Failure on Yemeni Aid Pledges
TEHRAN (defapress) – Millions of Yemenis face severe cuts to food, medicine and other handouts because the UAE and Saudi Arabia have failed to provide funds promised earlier this year, the UN said in a statement.
News ID: 78427 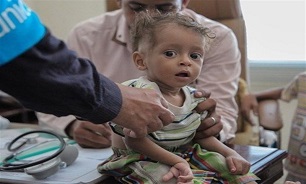 The UN’s Office for the Coordination of Humanitarian Affairs (OCHA) said food handouts to 12 million Yemenis and health services to 19 million were on the chopping block because of massive funding shortfalls, the Middle East Eye reported.

It added that one of the main reasons for this is that the UAE and Saudi Arabia have failed to fulfill their promises.

Riyadh and Abu Dhabi, part of a coalition waging war on Yemen, each promised $750 million in aid to the country at a UN fundraising event in February. According to UN figures, Saudi Arabia has so far only paid $121.7 million and the UAE about $195 million of the promised funds.

On Wednesday, UN spokesman Stephane Dujarric warned the humanitarian crisis would likely expose more Yemenis to hunger and disease unless donor countries came good on their pledges within weeks.

Without new funding, food rations to 12 million people will be reduced, including aid to at least 2.5 million malnourished Yemeni children that have been "keeping them alive", Dujarric added.

About 19 million people may lose access to health care, tens of thousands of Yemenis may be made homeless and clean water may stop flowing for five million people at the end of October, the UN said.