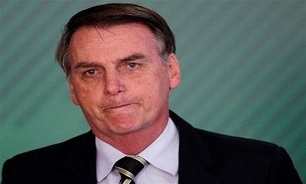 “The French president’s suggestion that Amazon issues be discussed at the G-7 without participation by the countries in the region evokes a colonialist mentality that is out of place in the 21st century,“ Bolsonaro wrote on Twitter, AFP reported.

Macron is using an issue that is a domestic one for Brazil and other regional countries for personal political gain, Brazil’s leader said, calling Macron’s tone “sensationalist”.

Macron tweeted earlier Thursday that fires burning in the Amazon amount to an international crisis and should be discussed as a top priority when the G-7 countries meet this weekend in France.

“Our house is burning. Literally. The Amazon rainforest – the lungs which produce 20% of our planet’s oxygen – is on fire. It is an international crisis. Members of the G7 Summit, let’s discuss this emergency first order in two days!” Macron said on Twitter.

Bolsonaro noted that Macron’s tweet included a photo of a fire in the Amazon that is at least 16 years old and has been seen often in recent days on social media posts about the fires.