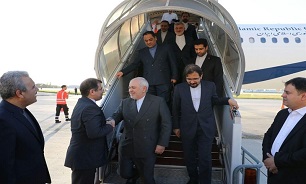 The top Iranian diplomat arrived in Paris on Thursday evening for a series of meetings with senior French officials.

Zarif has visited France after what he called a “fruitful end to Scandinavian tour” that took him to Finland, Sweden and Norway.

In a message on his Twitter account, the top Iranian diplomat said he held meetings with the Norwegian Prime Minister, Foreign Minister, and Minister of Trade and Industry, as well as parliamentarians during his stay in Oslo.

“I stressed necessity of both multilateralism and rule of law in age of reckless US unilateralism” in a speech at the Norwegian Institute of International Affairs, Zarif added.