US Unable to Make Persian Gulf Insecure: Iran’s Zarif
TEHRAN (defapress) – Iranian Foreign Minister Mohammad Javad Zarif highlighted the US administration’s plots against the Middle East region and said the Islamic Republic is trying to protect the Persian Gulf’s security and the US should know that it is unable to make it insecure.
News ID: 78436 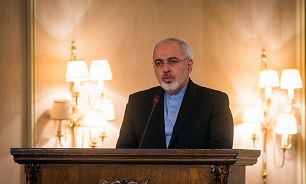 Iran with 1,500 miles of coastlines is the biggest Persian Gulf littoral state, Zarif said in a speech on the risk of war and the future of the Persian Gulf at the Norwegian Institute of International Affairs in Oslo on Thursday.

He added that half of the Strait of Hormuz is under Iran’s control and no one can ensure its security without Iran.

“They (US officials) should know that they cannot create insecurity,” Zarif stated, adding that if anyone wants the security of the Persian Gulf, he should know that it should be secure for all countries.

Washington has accused Iran of having a hand in those attacks, a claim Tehran has strongly rejected. Tehran has warned that such sabotage operations may be part of a general ploy to target Iran amid increasing regional tensions.

The US has asked its allies, including Germany, Japan, France, Britain and Israel, to join the coalition.

The call has, however, not been warmly received, with Israel and Britain becoming the only parties which have said flat out that they would join the alliance.

Israeli foreign minister Israel Katz said on August 7 that the regime would be part of such the US-led coalition to “protect the security of the Persian Gulf.” Katz claimed that Israel was determined to stop “Iranian entrenchment” in the Middle East region and strengthen Tel Aviv’s relationship with Persian Gulf countries.

A day afterwards, Iran’s Foreign Ministry spokesman Abbas Mousavi said Iran considered such possible Israeli presence in the region to be a clear threat to its national security, and reserved the right to counter it.