US Has Never Been More Isolated Than Today: Iran’s Rouhani
TEHRAN (defapress) – Iranian President Hassan Rouhani highlighted the US government’s failed policy on the Islamic Republic and said Washington has never been more isolated and weaker than today.
News ID: 78438 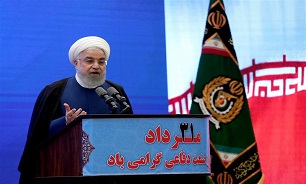 “After a year of enemies’ hard sanctions, it has become clear that the US has not been successful in any plan in the region against Iran,” President Rouhani said, addressing a ceremony held in Tehran on Thursday to mark the National Day of Defense Industry.

“Today, no one doubts it (the US failure in face of Iran) and even some of our neighbors, who had pinned their hope on the US admit that in the day of danger, the first one who escapes our region is the Americans themselves,” he added.

Rouhani further pointed to the international opposition to the US government and said, “The America has never been so much legally and politically weaker, more humiliated and isolated than today, and I do not remember such a poor situation for the US in history.”